The Santa Eulàlia festivities are organized in honor of Santa Eulàlia, co-patron saint of Barcelona. On February 10, 11 and 12 will parade through the streets and squares of Ciutat Vella giants and big heads, eagles, lions, dance groups, devils, dragons and other characters that are part of the festive tradition of Barcelona. And there will be castellers in the Plaza de Sant Jaume. The program of popular culture is extensive. In addition, there are exhibitions such as the exhibition of giants; open days and activities at the City Hall, museums and cultural centers; and specific activities for children.

This year the Children's Proclamation will be held again in the Plaza de Sant Jaume, on February 10 at 10:00 am. This event aims to promote the rights of children.

The program of popular culture: correfocs, castellers, and parades and passacaglias (2023)

Thewhole arsenal of Barcelona's popular imagery takes to the streets of the old town of Barcelona. Giants, big heads, the Eagle and many other figures. One of the most spectacular manifestations of popular culture are the correfocs; devils that parade dancing through the streets among firecrackers and fireworks, pushed by the noise of the drums. The correfoc will be held on Saturday 11 and will culminate with a fireworks display that will end the festivities of Santa Eulalia 2022; the children's version of the correfoc will be held a little earlier the same day. Another of the most colorful and widely followed activities not only in Barcelona but throughout Catalonia are the Castellers. The Castellers day will be on Sunday 12. The participating castellers (Barcelona, Sants, Vila de Gràcia, Poble-sec, Sagrada Família, Jove de Barcelona, Sarrià and Esquerdats) will have 60 minutes to raise their human castles, and they have to do it all at the same time (spectacular!). In addition, among the many popular activities you can meet and enjoy the sardana dancing, concerts of gralles, bastonaires, esbarts dancers for children and youth, a meeting of drummers, and many others. 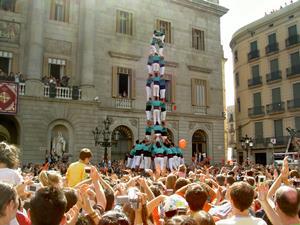 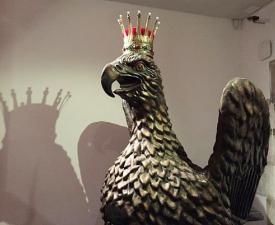 The exhibition of Giants and beasts

Open days and activities at the City Hall, museums and cultural centers.

The day February 11th from 10:00 am to 8:00 pm and on the occasion of the festivities of Santa Eulalia, the City Council opens its doors to citizens. A good opportunity to learn about the history and architecture of the building. You can visit the Black Scale, the Hall of Chronicles, the Hall of Good Government, the Hall of Labor, the office of the mayor, the Tàpies Room, the Plenary Hall, the Saló de Cent, the Hall of the Consulate of the Sea, the Office of Honor, the Hall of Charles III, the Hall of the City, the Gothic Gallery, the Scale of Honor and the Mirador de Maria Aurèlia Capmany.

Date for Correfocs 2020 is Wrong in This Article

The article states that "One of the most spectacular manifestations of popular culture are the correfocs; devils that parade dancing through the streets among firecrackers and fireworks, pushed by the noise of the drums. They are on Saturday 9,..."

One look at the calendar shows that in the year 2020, Saturday occurs on the 8th.

Thank you for your comment. As you can read on the top of the description of the event, we are in the process of updating it. The information you can read is from 2019. For the moment the only known are the general dates. We are waiting for the official program is released.