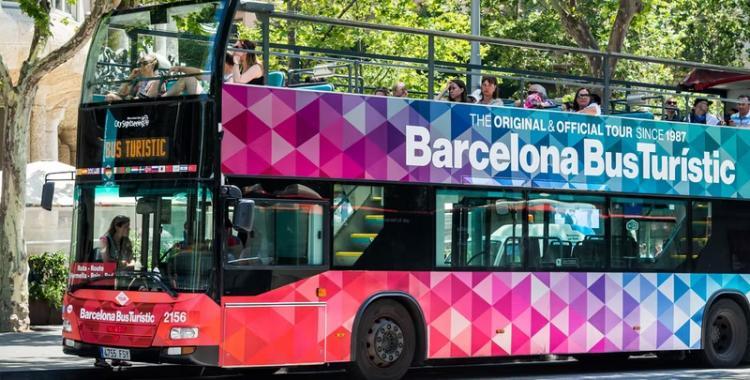 If you stay in Barcelona one day or two, the tourist bus will allow you to see most of Barcelona's places of interest and explore some of the most important ones. If you stay longer, it is a means of transport that, in addition to offering you a general idea of the city, will allow you to select which places or monuments you would like to know more in depth.

The Bus Turístic is the official tourist bus of Barcelona and is part of City Sightseeing ©, world leader in bus tours. It has three routes: the Blue Route, the Red Route and the Green Route. The three routes have a total of 43 stops and with 1 ticket you can use the buses of the three routes. Five of the stops allow to connect with the other routes. During the sightseeing tour you can get on and off of the bus as many times as you like. Once you have visited one place you can continue the tour with the same ticket.

Characteristics of the service and buses

Routes of the Hop-On Hop-Off Bus and stops

The blue route starts in the city centre of Barcelona: Plaça Catalunya Catalunya Square). The buses on this route will take you to the upper part of the city where you can visit the FC Barcelona stadium, the Camp Nou, the Royal Palace and the Pedralbes Monastery. Much earlier, the Tourist Bus will have passed the Passeig de Gràcia and your head will have turned from right to left to contemplate the most important buildings of Modernism, the essence of Barcelona architecture at the end of the 19th century and the beginning of the 20th; we refer to La Pedrera or Casa Milà, Casa Batlló, Casa Amatller and Casa Lleó Morera. And continuing with modernism, the Blue Route will take you to the great works of modernist style: Park Güell and the great icon of Barcelona, ​​the Sagrada Familia. But that is not all. This bus will cross the Gràcia district where the neighborhood of the same name is located. If you have time, wander through its streets and take something in one of its squares. 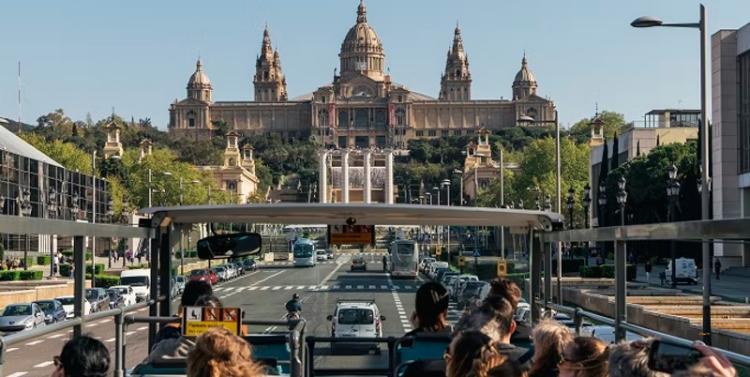 The red route also starts in the center of Barcelona, ​​but a little further up from Plaça Catalunya. As in the blue route, the most important buildings of modernism will also be waiting for your photos, but when you reach the obelisk of Avinguda Diagonal, the tour bus will turn left to drive along that avenue also full of modernist and modern buildings that house haute couture and jewelry stores, shopping centers such as L'Illa and El Corte Ingles, private clinics and companies of the financial sector. In the Plaça Francesc Macià the route will go south to reach the Plaça Espanya from where the bus will go up to Montjuïc, the Olympic Mountain home to several important museums such as the Miró Foundation, temporary exhibition centers such as CaixaForum, gardens, parks and places of tourist interest like the Poble Espanyol and the Magic Fountain. And do not forget the views, from Montjuïc you will enjoy many beautiful views of Barcelona. Then the Tourist Bus will leave Montjuïc, skimming the sea, and you will see the port, the statue of Columbus, La Rambla, it will enter the Maremagnum area, with its shops and restaurants and the L'Aquarium. The route will continue along the coast and will pass next to the Barceloneta neighborhood and the Parc de la Ciutadella that houses the Zoo, fountains, ponds and unique buildings. And finally, climb to the center with a stop in the Gothic Quarter, very close to the Picasso Museum. The old Barcelona at your feet.

Exceptionally, the green route will not work this summer (2022).

In the Hop-On Hop-Off Bus of the green route you will receive the breeze of the Mediterranean sea without pause. The impact will be double if you take this route after the red one, which also shows part of the coast of Barcelona. Before the 1992 Olympic Games, although it is hard to imagine today, the area through which the greenway runs was full of old or abandoned industrial facilities. In general it was a very degraded urban area, very different from what you can see from the tourist bus: well-maintained beaches, restaurants and beach bars along a promenade where locals and visitors walk, jog, pedal their bicycles or simply contemplate the sea. In this district, one quarter stands out above the others: Poblenou. This quarter mixes the old with the modern, the quarter life with high technology companies and, in addition, it is a place with many workshops of artists and artisans, and spaces of creativity. And a tip, a monument not very visited but which is worth climbing for several reasons: The Torre de les Aigües del Besòs.

Days: every day of the year except December 25 and January 1.

Duration and frequency of the journey

The frequency of the Tourist Bus service is between 5 and 25 minutes. The journey of the blue and red routes is approximately 2 hours and that of the green route is 40 minutes.

Dear Sir/madam,
We are planning our trip to Barcelona in July, but we are not sure about specific days. My question is if it is necessary to by ticket for tourisr bus in advance, or we can buy it 2-3 days before, or even directly in bus.
Thanks and best regards!

If you buy the tickets online you can get the discount and you can change the dates after the pucrchase. You can also can buy the tickets in the bus, in the Tourist Service Points of Turisme de Barcelona, newsstands, bookshops and hotels. In all those cases, without the possible discounts.

In reply to tourist bus question by Milan Jeremic (not verified)