Coming to Barcelona Barcelona it is not possible to avoid the Ciutat Vella (old part). It is the center, the historic district, there where cultures mix, and that includes also the famous Gothic Quarter, with streets and buildings from different eras. This quarter hosts monuments and areas of vital importance, and consists of different neighborhoods: el call (or Jewish quarter), Sant Just i Pastor, Santa María del Pi, la Catedral, Santa Ana, La Mercè and Palau. 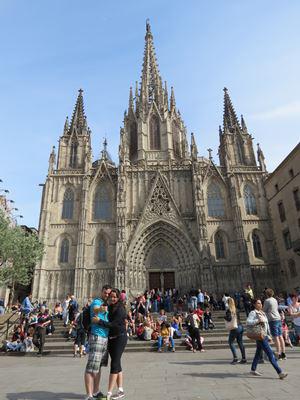 Las Ramblas, there where the quarter starts, are the central axis and a walk that goes from Plaza Catalunya to the Columbus statue and reaches the sea. The Ramblas is famous for its comings and goings of people, for its small stalls of flowers and animals (most have disappeared) and for offering this dynamism and multiculturalism that define the city. On the walk there, are buildings that do not go unnoticed as the Boqueria market and the Gran Teatro del Liceu. On its left side, the Plaça Reial is a gem surrounded by medieval arches and modern places for tapas.

At the left side of the beginning of the Ramblas,  the different streets lead to one of the most important commercial areas of the city:  Portaferrissa and Portal de l'Angel, with fashion and craft shops. Further down, Plaza del Pi is small and surrounded by shops and coffee shops where you can have hot chocolate, next to  the small Catalan Gothic style church of Santa Maria de Pi. In the middle of the Gothic quarter, is the Sant Jaume Square, an exponent of the life of the city where you can find the two buildings with more institutional representation: the City Hall of Barcelona  on one side and, in front, the Palace of the Generalitat.

In the narrow streets of this charming quarter, modern life is mixed with classical antiquity 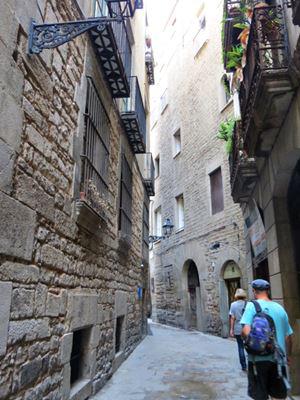 In the narrow streets of this charming quarter, modern life is mixed with classical antiquity. There is, for example, la plaza del Rei, a monumental square, with the Barcelona City History Museum in the Casa Padellàs, a former palace of the XV-XVI centuries, a good example of civil Catalan architecture. In the Paradís street, and to the surprise of many, lies the Templo de Augusto, with columns and a base of the ancient Roman temple of Barcelona.

In this area, we discover the cathedral square, gathering place for events and demonstrations of Catalan culture, where currently on Sunday morning they dance the Sardana. At Christmas, the craft market is located in this area. The square is dominated by the imposing cathedral of Barcelona, in the Gothic style, and current seat of the Archbishop of Barcelona. The cathedral is dedicated to Santa Cruz and Santa Eulalia, the former patron of the city.

Hotels in the Gothic Quarter