A walk on the Montjuïc mountain – Views of Barcelona at dawn

The name of the mountain is Montjuïc, but Wikipedia says that a mountain is usually defined as any summit at least of 700 metres high above sea level and the Montjuïc "mountain" has only 173 metres above sea level. Actually we should call it the hill of Montjuïc but imagine if the most important installations of the Olympic games in 1992 would have been held on the hill of Montjuïc and not on the Montjuïc mountain, no one would have taken us serious. But besides these topographic fact, we will call it mountain and we focus now on the region. One of the desadvantages of the Montjuïc is that it is a kind of mountain, but this is also its great attraction: the view of Barcelona is excellent and the nature and the monuments are worth to be visited. But we recommend to visited the mountain in a different way, that means not climb up the mountain to explore it, except you want to do it that way. One of the best ways is take a bus or with the funicular railway and then walk down, That`s exactly the opposite way: from the top of the mountain to the foot of the mountain. On the top of the mountain you will find the Montjuïc castle and from there we try to find our way down back to the city. During this walk you will find gardens (Jardins Joan Brossa, el jardín de cactus de Mossén Costa i Llobera...), museums (Fundació Miró, MNAC and others), restaurants (Martinez, Miramar...) and the Poble Espanyol (which is like a museum, a little village with examples of architecture from all over Spain), theatres (Mercat de les Flors and the greek theatre, "el Grec"), several forms of transport for tourisme like the funicular railway and two cable cars, sports installations and and hotels with views of Barcelona such as the Miramar Barcelona GL.

The Tourist Bus has several stops at important sights of interest, but you can also take a bus, f.ex. the bus line 150 at the bus stop close to the venetian towers at the Plaza de Espanya. This was the tour I have chosen and from where I took the video down here. My tour, my way down was after getting off the bus at the final bus stop of the Monjtuïc castle was the following: Carretera de Montjjuïc -> Jardins del Mirador (view over the port of Barcelona) -> Jardins de Joan Brossa until reaching the building Esféric and the entrance (exit for me) of the gardens -> Av. Miramar -> observations platforms near the hotel Miramar with fantastic views of Barcelona and the port -> Restaurante Martinez and unfortunately, it was already dark, too late to visit the cactus garden which is next to the restaurant -> Passeig de Miramar -> carrer de la Font Trobada -> and hear is the exit of the green zone of Montjuïc entering the calle Cabanes de Poble Sec.

Enjoy Montjuïc with all the intensity

Accommodation for all
budgets in the
Montjuïc area 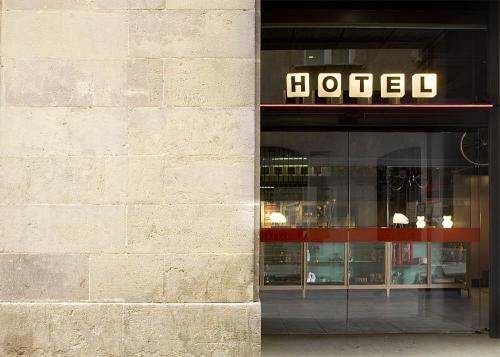 The cable cars of Montjuïc
to know Barcelona
from the air